Students explore and analyze the economic, political, and social transformation of the United States since the time of the first European encounters. Students are asked to master not only the wide array of factual information necessary to do well on the AP Exam but also to practice skills of critical analysis of historical information and documents. Students read primary and secondary source materials and analyze problems presented by historians to gain insight into challenges of interpretation and the ways in which historical events have shaped American society and culture. The content aligns to the sequence of topics recommended by the College Board and to widely used textbooks. Students prepare for the AP Exam. This is the second semester of HST500.

Topics Covered: causes and consequences of the French and Indian War; growing tensions between the colonies and British Parliament over taxation and representation; the Declaration of Independence; the causes, events, and impacts of the Revolutionary War; the French involvement in the war; origins, structure and significance of the Articles of Confederation; events and ideas surrounding the Constitutional Convention and the structure of the Constitution; debate over the ratification of the Constitution and the development of the Bill of Rights.

Topics Covered: struggle for American identity in early years of new nation; George Washington and the development of the role of the President; Jeffersonian democracy; Jacksonian democracy; emerging culture of republicanism, the early industrial and market revolutions, the emergence of political parties, foreign relations, development of the role of the Supreme Court, debate of the Bank of the United States, the causes and consequences of the War of 1812; major decisions of the Marshall Court; the rise of immigration and nativism; Jacksonian democracy; the four main crises of the Jacksonian era; the Second Great Awakening; reform movements; the abolition movement; and artistic and philosophical movements including the Hudson River School and transcendentalists.

Topics Covered: trends in westward expansion; life on the trail; border crisis with Mexico and the Mexican War; concept of manifest destiny; and the compromise of 1850; impacts of Mexican War on land acquisition, slavery, and economics; debates over immigration, expansion, and slavery; "Four Horsemen of the American Apocalypse"; the sectional crisis was secession inevitable; causes, characteristics, and course of the Civil War; political, social, and economic consequences of the Civil War; the Emancipation Proclamation and its impacts on war efforts and slave population; key figures in the Civil War; competing models for Reconstruction; assassination of President Lincoln; policies and impeachment of Andrew Johnson; radicalization of Reconstruction; the 13th, 14th, and 15th Amendments; and white resistance and the gradual denial of African American rights in the south.

Topics Covered: characteristics of the Gilded Age; social and economic effects of industrialization; the expanding economic power of the United States; key figures in the American industrialization; impact of unregulated economy on business and industry; state and federal government attempts to reign in big business; railroad industry and westward expansion; conflicts between American Indians and settlers/ranchers/miners; creation of mass culture; cultural impacts of deregulation, industrialization, and westward expansion; urbanization; competing ideas of urban and rural life; immigration and minority rights; rise of agrarian discontent; rise of Populism; and arguments of role of government.

Topics Covered: goals, characteristics, and types of Progressivism; muckrakers and social reform to achieve social, economic, and political goals; socialism and the Socialist Party; changing role of government (federal, state, and local); roles of Presidents Roosevelt, Taft, and Wilson in promoting Progressive era policies; successes and failures of the Progressive era; beginnings of environmentalism and influence of John Muir, Gifford Pinchot, and Richard A. Ballinger; American expansionism and imperialism; conflicts in Chile and Venezuela; building of U.S. navy; imperial efforts in Hawaii, Philippines, and Panama; American influence and involvement in Spanish-American War; isolationism and relations with Europe at the outbreak of World War I; the course of World War I before, during, and after American involvement; Civil Rights during and after the war; the outcomes of the Treaty of Versailles and the League of Nations; normalcy and the end of the Progressive era; social, political, economic, and cultural trends between the first and second wars; economic trends following World War I; collapse of the world economy; Stock Market Crash and the Great Depression; FDR and the New Deal programs; the changing role of government following economic collapse; overall impacts of New Deal programs on economy, politics, and popular culture; American isolationism in the 1930s and slow drift towards intervention by 1941; Pearl Harbor and U.S. involvement in World War II; mobilization and its impacts on the American economy, society and politics; outcomes of American involvement in World War II; treatment of Japanese Americans during the war; the course of the war in the Pacific and in Europe; dropping of the atomic bomb and the end of the war; and diplomacy during and after the war.

Topics Covered: aftermath of World War II; emergence of two opposing world superpowers USSR and USA; American policies of containment, the Marshall Plan, NSC-68 and burdens of Cold War; the Truman Doctrine as cornerstone of U.S. foreign policy; division and conflict in Korea; role of U.S. in Cold War era conflicts in Egypt, Hungary, French Indochina, and Cuba; role of JFK in Cold War including Bay of Pigs, Berlin and the Space Race; trends in popular culture and media during the 1950s, 60s, and 70s; the Red Scare and its impact on American society; the modern civil rights movement including Brown v. Board, the Montgomery Bus Boycott; Sit-Ins, the Civil Rights Act, and the Voting Rights Act; the roles of key figures in the civil rights movement; other movements for civil rights including, but not limited to, women, American Indians, and the LGBT community; post-war trends in religion, youth culture; baby boomers and the demographics of the post-war era; the Vietnam War and growth of American involvement in French Indochina, including the Gulf of Tonkin incident; course of the war from 1964-1975; the social, economic, and political impacts of U.S. involvement in Vietnam; increasing prosperity after World War II; creation of the EPA; and Watergate, the resignation of Richard Nixon, and emerging distrust of government.

Topics Covered: globalization; expanding role of popular media and American cultural influence worldwide; modern religion and political activism; Reaganism, deregulation, increased military spending, and liberalism on the wane; Impeachment of President Clinton; Rodney King and Anita Hill; Welfare Reform Act of 1996; election of 2000; terrorism and the wars in Afghanistan and Iran; emerging questions about civil liberties and the role of the federal government during time of war; trends in immigration; and the elections of 2008 and 2012. 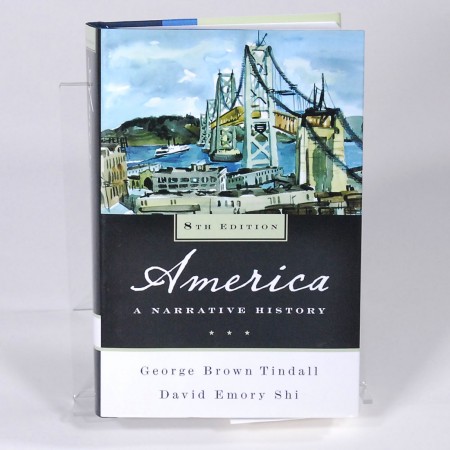